Essilor is a global player in corrective lenses and instruments for ophthalmologists and opticians. Essilor launched an impressive SMS coupon campaign to boost sales in different retail stores in France.

The SMS campaign was promoted through in-store posters. This allowed potential customers to send an SMS to a shortcode. In response to this message, they received the coupon link and the unique code. Per a unique phone number, one received a single-use coupon. When someone tried again, that person received the same coupon and code. In this way, fraud, something Essilor had been confronted with in the past, became impossible. Fraud, by the way, was also the reason for rolling out an SMS campaign instead of an email campaign. You could only receive the coupon if you entered a unique mobile number. It's much more difficult to falsify a mobile phone number than an email address.

A reminder was sent one month before the coupon expired to those who had not yet redeemed the coupon. The goal was to boost the conversions. Furthermore, it was a successful and sophisticated campaign with many interesting statistics. Essilor obtained a detailed overview of the number of redemptions per store and how many people had viewed the coupon without redeeming it. 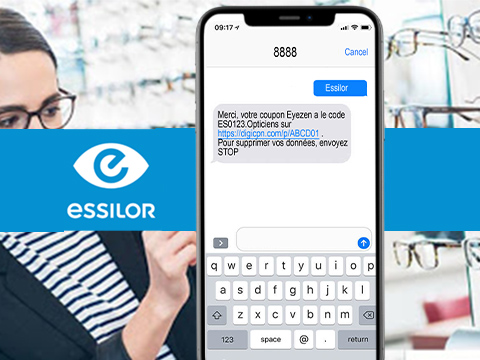 Sign up today and send your first message in minutes.